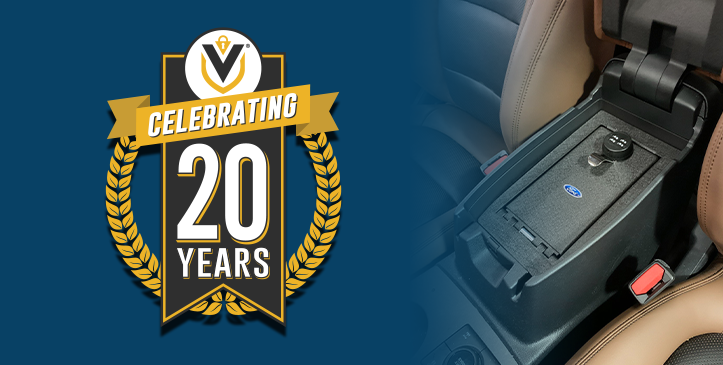 Console Vault® was born out of an idea to combat in-vehicle theft 20 years ago. This idea was transformed into reality with the launch of the 2001 Hummer H2 In-Vehicle Safe, Console Vault's first product offering. Console Vault's inaugural in-vehicle safe was the first of its kind. The Console Vault design was a revolutionary product, as it was custom built for the center console of specific vehicles. No other company had anything like this at the time.

Designed to accommodate and secure high-value items ranging from mobile phones, tablets, and other key valuables, Console Vault's In-Vehicle Safes appeal to anyone wanting enhanced security while traveling. "We have received messages from business travelers, camping enthusiasts, road trip warriors, and everyone in-between telling us how our product has provided them with peace of mind and confidence," said Founder, Scott Bonvissuto.

Since inception in 2001 and launch of the first vehicle application, Console Vault has designed and brought to market over 130 dedicated applications, with offerings for a wide range of trucks, cars, SUVs, and now even Harley Davidson motorcycles. Over the past 20 years, the company has built a reputation as the leader in their category, selling hundreds of thousands of in-vehicle safes, and preventing countless in-vehicle thefts from "Smash and Grab" break-ins.

Over the last two decades, Console Vault has also seen steady engagement from the conceal carry, military and first responder communities. "A major epiphany for us was at an industry tradeshow back in 2004. During the event, we saw excitement from the gun-owner community, and realized that our product was an important safety solution for them," said Scott. The company now offers military and first responder discounts and has partnered with organizations such as Project Child Safe to support and promote firearm safety education.

Console Vault is headquartered in Columbus, Ohio with a dedicated manufacturing, assembly, and distribution center close by in Wooster, Ohio to ship both domestically and internationally. Today every Console Vault In-Vehicle Safe is engineered and designed to fit each vehicle model with easy do-it-yourself installation, and every product is protected by a lifetime warranty.